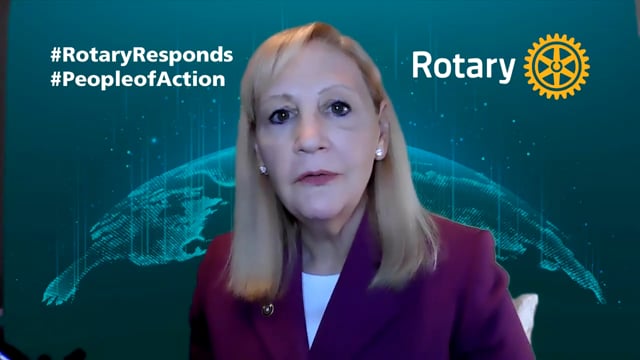 Elizabeth Usovicz is a 23-year Rotarian and Past President of the Kansas City Plaza Rotary Club. She served as the 2008-2009 District Governor for Rotary International District 6040, Missouri. She currently serves as the Rotary Public Image Coordinator of Zone 31, and will serve as Director on the Rotary International Board of Directors for 2021-2023. She is a facilitator, trainer and speaker for Rotary programs, zones and districts throughout the United States. She has served as a trainer for the Rotary International Assembly, and has served on the Training teams for several Zones 30 and 31 Institutes, including as Training Chair for the 2013 Zones 30 and 31 Institute in Lexington, Kentucky. She served as General Chair for the 2016 Zones 30 and 31 Institute in Cincinnati in 2016, was Program Chair for the 2015 Institute in Baton Rouge, Louisiana, and has also served on the Zone 31 Nominating Committee, as well as served multiple times as an RI President’s representative. Elizabeth served as Rotary Public Image Chair (RPIC) for Zone 31 from 2017-2020.

Elizabeth served as Rotary District 6040 Grants Chair for six years, and is a recipient of The Rotary Foundation’s Citation for Meritorious Service. In October 2014, Elizabeth was recognized at the White House as a Rotary Women of Action honoree, and is a 2011 and 2012 recipient of the United States President’s Volunteer Service Award.

Elizabeth’s personal tagline is, “The Power of We is Within Us All.” Her passions in Rotary are supporting orphans and at-risk children in Malawi, Africa (she has written nine Rotary Foundation grants in support of Malawi Children’s Village) and in helping Rotarians and clubs to develop and promote successful service projects. In 2015, she was instrumental in forming the D6040 Waldo Brookside Rotary Club, which was chartered with 50 members. She supports the Rotary Foundation as a member of the Paul Harris Society, a Major Donor and a member of the Bequest Society. She has especially enjoyed opportunities to meet Rotarians from around the world at International Conventions, as has been a presenter at the Rotary Conventions in Montreal, New Orleans, Lisbon, Seoul, Atlanta, Toronto and the 2020 Virtual Convention. In April 2016, Elizabeth led a Vocational Training Team to Malawi as part of a Rotary Foundation Global Grant project to encourage students, especially girls, to stay in school and complete their primary and secondary educations. Her youth service also includes 8 years as a Missouri RYLA counselor.

Professionally, Elizabeth is principal of her consulting practice, WhiteSpace Consulting, focused on leadership development, sales coaching, business strategy, strategic planning facilitation and qualitative (focus groups) research. Prior to establishing Whitespace Consulting, Elizabeth held leadership roles in organizations such as Deloitte, Kellogg’s, DST Systems and the Kennedy School of Government at Harvard University. She is fluent in Spanish and French, and spent nearly 10 years working, living and doing business in Europe, Asia and Latin America. She has been recognized for her professional and community service in Kansas City, as President of KCDMA and KCDMA’s Direct Marketer of the Year, and as a Buck O’Neil legacy seat honoree by the Kansas City Royals. She has been part of the leadership of two start-up companies and currently serves as a volunteers mentor and advisor to start-up founders through MIT’s Growth Mentoring Services in Kansas City.

She is a frequent motivational speaker on service leadership, volunteer leadership and business development. She is active on social media platforms and has written for three online business magazines. She also publishes her own blog on business topics, as well as a blog on service leadership for Rotarians, called the Thought Spot. She publishes on LinkedIn, where her profile has been one of the top 10% most viewed profiles.

Elizabeth grew up in Salem, Massachusetts and has a strong appreciation for both American history and for her Lithuanian heritage.  She and her husband, Dean Mathewson, live in Westwood, Kansas.